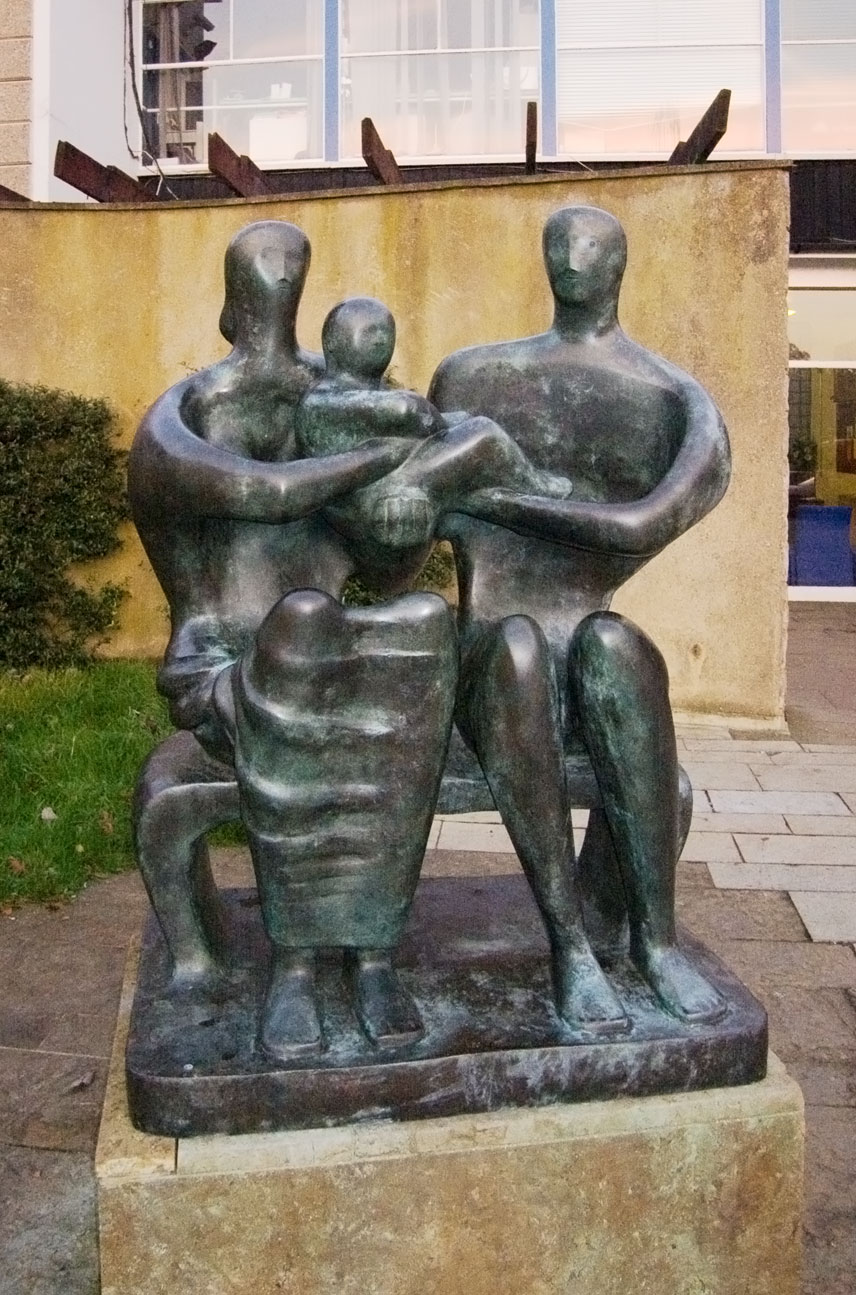 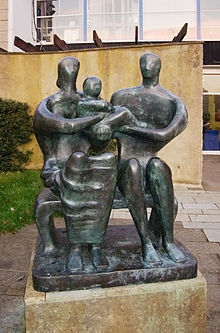 Chemical coloring of metals is the process of changing the color of metal surfaces with different chemical solutions.

The chemical coloring of metals can be split into two types:

Chemically coloring a metal is distinct from simply coating it using a method such as gilding or mercury silvering, because chemical coloring involves a chemical reaction, whereas simple coating does not.

The processes of chemical coloring of metals are as old as metalworking technology. Some of the earliest known examples of colored metal objects are about 5000 years old. They are bronze casts with some silver-colored parts, which originate from the Anatolian region.[citation needed] Similar processes can be found on some ancient Egyptian copper sheets.[2] Another example of early chemical coloring of metals is the Nebra sky disk, which has a green patina and gold inlays.

Pliny the Elder mentioned the distinction between naturally occurring and artificial patina in the first century C.E.[3] Another ancient document about the chemical coloring of metals is the Leyden papyrus X (3rd century C.E.).

At the time of the Renaissance, the most significant documents were the Treatise on Goldsmithing and the Treatise on Sculpture by the famous Italian mannerist, sculptor and goldsmith Benvenuto Cellini.[4] Patination is also briefly mentioned by Italian painter and writer Giorgio Vasari and by Pomponius Gauricus in his work De Sculptura 1504. André Felibien also briefly mentions some techniques for patination of bronze sculptures in his work Principes in 1699.[5]

Since the end of the 18th century, chemical coloring of metals has been a regular topic of various collections of chemical technology recipes, and from the mid-19th century onwards, this topic was included in most electroplating manuals and handbooks of goldsmiths and silversmiths.

After the Second World War, there was a growing interest in green patinated copper sheets, which were intended primarily for architectural use. Technologies for anodic oxidation of titanium, and later niobium and tantalum, have evolved since the mid-1960s. Technology for the anodic oxidation of stainless steel was developed too in 1957. (patent US 2957812A).[12][13][14]

Now, the possibilities of using microfungi in the patination of copper and iron are being investigated, and laser-induced staining of copper and its alloys, niobium, stainless steel, and chromium plated objects, are being tested.[15][16]

Interference colors obtained by heating steel to a certain temperature. The same colors can also be obtained by chemical or electrochemical means 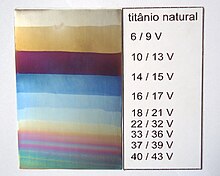 Before a metal is colored, it must be cleaned of oxide and grease using a strong detergent solution or pickled in acid. The person performing the coloring should wear protective clothing, gloves, and safety glasses, and work in a well-ventilated area.

The objects are immersed in a 2.5% solution of potassium or sodium sulphide. After the appearance of the color, the silver objects are thoroughly washed and protected by waxing or varnishing.

Green for copper and alloys[edit]

The copper objects are immersed in a potassium or sodium polysulfide solution (2.5%). Alternatively, sulfurated potash can be used. After the color is developed, the objects must be rinsed, dried, and waxed or varnished.

The copper objects are boiled in a solution of 12% copper sulfate and water that is at least 3 days old. After the color is developed, the material is rinsed, dried, and waxed or varnished.

The objects are very thinly coated with linseed oil, then gradually heated up to 300 – 400 °C. If necessary, the process is repeated. This process may be used on any metal except lead, tin and its alloys, that can be heated to the temperature mentioned.

The object is coated with a 5% aqueous solution of ferric chloride. After 24 hours it is rubbed with a coarse cloth or finest steel wool. Subsequently, the process is repeated at least 3 times. Finally, the material must be wiped with a greasy cloth.

The objects are immersed in a 20% aqueous solution of ferric chloride and then rinsed, dried and waxed or varnished, when colored.

The objects are immersed in a 20% aqueous solution of ferric chloride for 20 minutes. After the desired color has been reached, the objects must be washed, dried and waxed or varnished.

The objects are immersed in a boiling solution of 20 g of ammonium molybdate and 5 g of sodium thiosulphate in a liter of water. It is necessary to rinse, dry and wax or varnish the objects after the development of color.

A solution of 280 grams of sodium thiosulphate, 25 grams of copper acetate and 30 grams of citric acid can be used on copper and its alloys, silver, nickel, iron, and gold. The color depends on the duration of immersion, the sequence of colors on brass: golden yellow-copper-purple-dark blue-light blue-chrome-nickel-red-gray, only blue and gray-black on iron or carbon steel

3% trisodium phosphate solution, a stainless steel cathode and an object as anode can be used for a simple electrolyte.

Many other electrolytes can be used – supposedly even Coca Cola.[citation needed]

The colors depend on the DC voltage.

It is mandatory that this process is performed while wearing rubber gloves because of the potentially dangerous voltage.